1. Beginning
The former section "Physics for Scientific Toolbuilding" of Friedrich Schiller University (FSU), Jena (since 1971 Section of Physics) was founded in 1968 together with a division for Detector Physics (DP). It was naturally based on the expectation of a demand from the nationally owned enterprise (VEB) Carl Zeiss Jena in reference to novel detectors in the field of optics. Therefore, we initially searched for scientifically challenging problems which were of interest to toolbuilding and which had not been worked with by other groups of the nation. This led us from the minimization of the detectors´ noise for operating in low temperature over superconducting bolometers and irradiated Josephson contacts (Shortly before, the Josephson effect had been discovered.) to Superconducting Quantum Interference Devices (SQUIDs), which were initially scratched under the microscope.

At that time, we did not have previous knowledge of physics of superconductivity, low temperature technics and, particularly not, the liquid helium; but the colleagues from Dresden, who worked in the field of low temperature physics at the Academy of Sciences (AdW) under the responsibility of Ludwig Bewilogua, helped us.

First, it was necessary to collect the accumulated experimental and theoretical knowledge and to process this knowledge for our purposes. The result of our work was the “Josephson-Bibel” that was available to almost every member of our division. Within half a year, we had learnt the most important features of physics of superconductivity.1 Our achievements are shown below in a simple way:

Electron-phonon-interaction has a limited range. By this, the so-called length of coherence is essentially determined which cannot be longer than a few µm, depending on the material.

An external subcritical magnetic field cannot enter a closed superconducting structure, e.g. a loop. The external field generates a shielding current. The magnetic field can only quantized enter into or escape from the loop at a weak link of the structure (Josephson contact) and when it is changed. The flux quantum is a natural constant with a value of h/2e (h Planck´s constant, e elementary charge of electron).

Weak links of loop structure had been produced for the first time by mechanically adjusted point contacts on the tip of a fine pitch screw (Zimmerman contact), later by microbridges or tunnel junctions (figure 1, SQUID schematic). 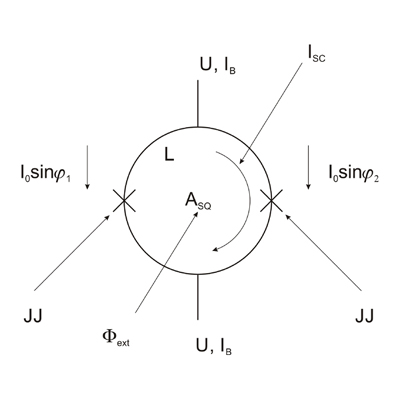 figure 1: dc-SQUID with 2 Josephson junctions (JJ). The shielding current Isc ensues from the magnetic flux which saturates the SQUID area A (with inductivity L). The operating current IB composes from the interfering partial currents over JJ’s.
The microbridges of a vacuum-metalized thin film loop must have dimensions of some 100 nm. Tunnel junctions need insulator films of approximately 2 nm. At this point, we deal with real nanotechnology which we have begun approaching by research at the end of the 1960s (e.g. Nb/Al/AlO/Pb), but there was no speedy way of thinking in terms of its stable, electric-tight processing.

As early as 1969 Wolfgang Richter came up with his proposal of evaporating the SQUID structures and scraping the critical dimensions of microbridges under the microscope. In this way, he was able to experiment with thin-film SQUIDs. For that purpose, bridge contacts were used to perfect the SQUID applying all the experimental skill: at first we applied photolithography, then electron beam lithography. We were assured by the superconductivity microelectronics trend (or microcryoelectronics trend) that emerged in 1969, expecting a quicker and thicker packed electronics as opposed to semiconductor arrangements, in which micro-SQUIDs played an important role as storage elements. In this phase, our co-operation with the Combine of Robotron Dresden (KRD) and the Combine of Carl Zeiss Jena (KCZ), the Institute of Cybernetics Kiev (IKK), the Ukrainian Academy of Sciences as well as the Radio Valve Plant Neuhaus (RWN) was decisive. All the photolithographic works were processed, especially by RWN. Hans-Joachim Köhler coordinated this very carefully, and he incorporated his science projects into them, e.g. Analog-to-Digital and Digital-to-Analog Converter (DAC) with up to tens of thousands of devices.2 That also enabled his entrance to technics of the Josephson voltage standard later on, which was the first measurement standard of this kind in the former socialist countries in the eighties. The identification of our structures with UJ xyz (University of Jena) resulted from contact with RWN. As Peter Pertsch cooperated with the combine of Carl Zeiss, a pepped up Zeiss scanning electron microscope could be used to promote the integration of electron beam lithography. In this boom phase of microcryoelectronics, they worked together with Wilfried Andrä and Felix Lange3 on superconducting shift registers as well as together with Hans-Joachim Pohl4 on magneto-optic storage arrangements. Just as for the DAC, patents referring to this were applied for and granted, but we were not ready for publication.

Around 1974, the sometime global market leader IBM backed out of microcryoelectronics and, consequently, our partner Robotron did. In fact, we had taken part in this race bringing good results (e.g. first application of e-lithography to concrete microelectronic devices and the possible structure dimensions in the ambit of submicrometers involved), but we lost to semiconductor microelectronics. 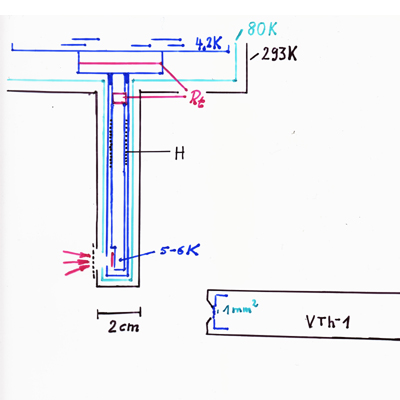 figure 2: superconducting bolometer (original sketch from A. Reichmann)
This runs parallel to Alfred Reichmann´s goal achievement, who intended to cultivate superconducting bolometers of high detection sensitivity (figure 2). In particular, the theoretical limit of detectability was almost reached by sophisticated thermal stabilization of the working point, a meandered film on the transition between superconductivity and normal resistive state: As Igor Dmitrenko estimated, it was equivalent to the visibility of a 100 W light bulb at a distance of 500 km. However, the intricate cooling system with liquid He prevented an application in Zeiss equipments and in other applications. The Zeiss firm did not receive utilizable detectors from us, but a technology for manufacturing perfectly plane photo plates for optic lithography which had been elaborated by Franz Klapper and, then, were urgently required for reasons of higher productivity. For that purpose, the first cleanroom of Jena was created in the old building´s Institute of Physics. Simultaneously, an investment was made in the He-condenser which was the latest by the British Oxygen Company (BOC) at that time.

While the machine cost approx. 300,000 Mark, the construction and the periphery had to be essentially financed by unbalanced sources of FSU and its surroundings to the amount of approx. 12 million Mark. Most notably, Hannnes Nowak did the overall business with the most prudence and success in a timely manner.

chapter 2. Supersensitive methods to the measurement of the magnetic field