Compared to other methods, a benefit can be derived from the non-contact measurement of biomagnetic fields, which means that it is non-invasive and without reference. The source can be reconstructed by measuring the allocation of the magnetic field. 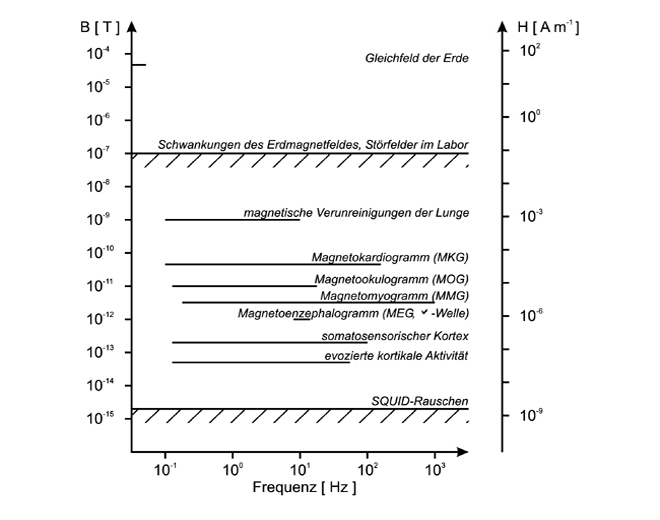 figure 7: gradiometer; (top): principle of a symmetric first order gradiometer. (bottom left): first asymmetric gradiometer from Jena. (bottom right): micro SQUID system
Helium cryostats were needed to cool the SQUIDs and superconducting gradiometers, consciously doing without cooling by liquid nitrogen. A double-walled glass cylinder with finger (manufactured according to our guidelines specified for VEB Schott and Gen. glass works in Jena ) and with Mylarfilm (perforated by handcraft), coiled and evacuated by us, was our first cryostat (figure 8, bottom left) that could be used for biomagnetic measurements. In fact, hold time for liquid helium was approx. 12 hours and thus very limited, but the first magnetocardiograms (magnetic field of the heart) could be recorded in Jena. Horizontally arranged gradiometers were used. The gap between the pick-up coil and the external wall was 35 mm in the cylinder cryostat, and it was only 8 mm in the finger cryostat.

For improving the suppression of disturbance fields, a double-walled µ-metal cylinder was manufactured in the VEB Halbzeugwerk Auerhammer with active support from Wolfgang Hädrich and his mechanical workshop M3 (length 2.4 m, diameter 0.8 m). Either of the cylinders was made up of 4 rings which were positioned vertically and which could be interlocked (1-mm-thick Muniperm-16-sheet). For the minimization of mechanical disturbances, a stable cryostat support made of aluminum was manufactured in M3 which allowed the test person to sit in (figure 8, top left). Another method to mechanical decoupling of the test person from the measuring system (figure 8, top right) was that the µ-metal cylinders and the cryostat support were embedded in quartz sand (VEB Schott and Gen. glass works in Jena) and that the test person had to sit on a chair (wholly and mechanically decoupled from the measuring system). Later, a swing that was fixed on the ceiling replaced the chair. 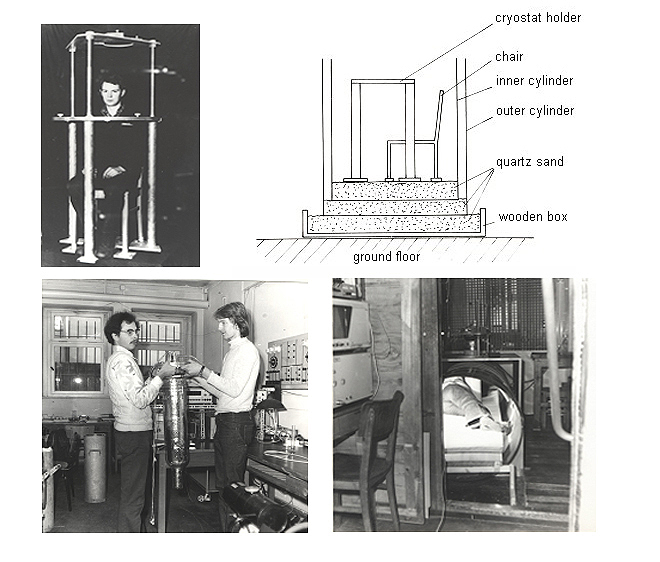 figure 8: measuring equipment; (top left): aluminium cryostat holder; (top right): schematic construction of the damping method; (bottom left): double-walled glass cryostat with finger; (bottom right): cylinder shielding, lying construction
The first measurements on the magnetocardiogram were successful in the summer of 1978 (figure 9). It was scheduled for a time between 1.00 a.m. and 3.00 a.m. at night in order to keep the external disturbances as low as possible.

In 1979, we developed a lying construction (figure 8, bottom right), adapted dc-thin film SQUIDs with an integrated flux transformer6 8 to improvement and incorporated the lying μ-metal cylinders as well as the measuring apparatus into a Faraday cage16,17 because of the very uncomfortable positioning of the test person (Artistic performance was necessary for climbing into the cylinder that was opened on top and for sitting on the swing.). These improvements also helped to facilitate the recording of magnetocardiograms at normal working hours.

figure 9: early magnetocardiogram
In the early 1980s, we achieved the import of a plastic cryostat (BMD5) from the USA. Helium cryostats were on the embargo list and were delivered indirectly via Vienna into the former G.D.R.. This finger cryostat made a far less consumption of helium possible (Helium used to be very scarce and expensive at that time.) and thus had a markedly higher durability (3 to 4 days). The intrinsic noise was less and the warm-cold-distance was less than 1 cm.

Then it made sense to refine the adjustment of gradiometers because of the improved SQUIDs and SQUID electronics.18 In 1981, our work was successful since the transition to biomagnetic measuring in an unshielded environment was completed by this. Together with the engineer Hans-Ulrich Mänz, the mechanics of the workshop Heinz Rossbach and Fritz Scheffler (Section of Physics of FSU Jena and Institute of Physics and Technics (PTI) of AdW of the G.D.R.), the prototype of a one-channeled biomagnetic measuring system was created: a symmetric second order gradiometer that could be adjusted on all the three space axes with antenna diameter of 20 mm, basic length of 55 mm, magnetic field sensitivity of 20 fT Hz-1/2, adjustment better than 10-5. In 1984, a cryostat support, which was made of wood and which was height adjustable (z direction), and a bench, which was movable into x and y directions, were designed with the leading co-operation of Günter Kirsch.

This biomagnetic measuring station was duplicated and was delivered to A. Schirdewan, who worked at the Central Institute of Cardiac and Circulatory Research (ZIHK) in Berlin (Buch) and who operated and maintained it.

A second measuring station was manufactured by us and delivered to Prof. Cholodow and Sasia Gorbatsch who worked at the Institute of Higher Neural Activities of the AdW of the USSR, in Moscow. We could successfully take further measures for installation that contributed to the reduction of massive HF disturbances which had been caused by the Muscovite television tower.

The drawings of construction of both the wooden cryostat support and the movable bench were handed over to Wladimir Sosnitzki, who worked at IKK in Kiev. In the late 1990s, a similar version of our basic construction reemerged in the SQUID-AG Essen, in which Ukrainian scientists were employed.

The international scientific aim was given by the transition from one-channeled measuring systems to multi-channeled systems in the 1980s. A considerably improved localization diagnostics could be achieved by simultaneous multi-channeled detection of biomagnetic activities. Under the responsibilities of Hannes Nowak und Frank Gießler, the tunable 5-channel system (figure 10, top left) in a cooled-off state (4,2 K), which was the first worldwide, was constructed in Jena for its application in an unshielded environment,19,20,21 and it was applied to biomagnetic tests (figure 10, bottom left and bottom right). The starting point was the aforementioned one-channel module as well as an invention that facilitated a sequence of implementation of all the 15 adjustments of gradiometers in operation (figure 10, top right) and, if necessary, a repetition of that implementation whenever it was required.22 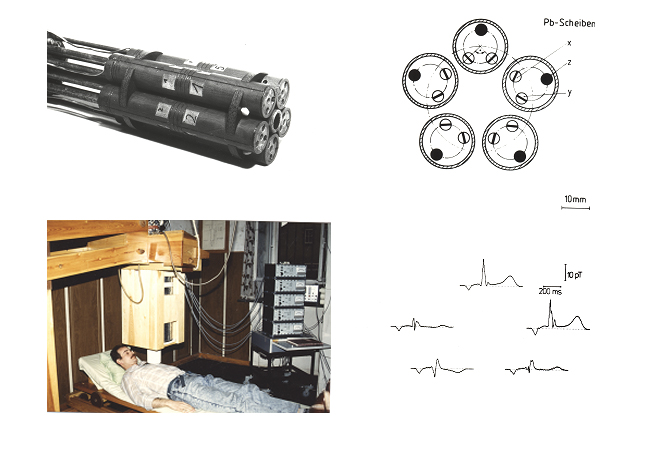 figure 10: (top left): antenna system of the 3-channel-arrangement; (top right): schematic exposition of the arrangement of superconducting discs for gradiometer fine tuning; (bottom left): mulitchannel measuring system; (bottom right): 5-channel-MCG
Our potential partners who might have been interested in the application of the innovative biomagnetic measuring method naturally came from medical science. Then, we found these partners, such as Hans Volkmann from Jena as well as Alexander Schirdewan and Horst Heine from the Central Institute of Cardiac and Circulatory Research of the former AdW of the G.D.R. in Berlin. Moreover, the number of our human resources in Jena was definitely too small. We therefore decided to shift tasks from FSU to AdW. That enabled our colleagues involved to work 100 percent on biomagnetism in their work time. These were, among others, Hannes Nowak, Hans-Georg Zach and Martin Burghoff at the Institute of Physics and Technics of the AdW in Jena and Wolfgang Haberkorn (hoping for production of devices in the near future) in the ZWG of the AdW in Berlin.

We were interested in the issue of gaining useful information on functions of the heart that went beyond established methods. Hannes Nowak, Hans-Georg Zach, Martin Burghoff and Hans Volkmann from Jena as well as Alexander Schirdewan from Berlin also worked on the examination of the heart conduction system23,24 and the necessary techniques for assessment, for instance, on the visualization of eddies in the heart; whereas Wolfgang Haberkorn examined electromagnetic models of the heart, for instance, the impact of electrically mute regions (infarcts) on measuring signals. We reported on the first cycle of works in this field, in which we had not used the larger scale shielding usual by that time, and on our first reasonable results, however, without making statements on medicine at the international low temperature conference LT 17 in 1984.25

Support to the Biomagnetic Work Group in Jena was reinforced by Frank Gießler in 1987 and by Ralph Huonker in 1988.

The total results from these works had not yet been sufficient for making a decision on tool development in the ZWG by 1988 due to the fact that computer science and cryogenics were extremely underdeveloped in the former G.D.R.. In this respect, we probably promoted positive decisions of others on tool developments. That might have also been resulted from the fact that Günter Albrecht was member of the Commission of Low Temperature Physics of the International Union of Pure and Applied Physics from 1980 to 1988.

Substantial support to the Biomagnetism Group of Jena was reinforced by Jens Haueisen in 1993, who took charge of the Biomagnetic Center (BMZ) in the clinical center of FSU Jena in the late 1990s, and Uwe Schulze in 1994. Both of them are named here to represent the numerous employees, Ph.D. students and diplomates who have contributed to the success of the BMZ of Jena.

Hannes Nowak's team moved to the newly built biomagnetic center of the neurology clinic in the clinical center of FSU Jena in Philosophenweg, in December 1993 (figure 11, bottom left). At that time, the commercial double-dewar biomagnetometer by the Philips company (2 x 31 channels, symmetric first order gradiometer, shielding cabin AK 3b) was put into operation (figure 11, bottom right). A second shielding cabin, a special Dewar (warm-cold-distance: 3 mm), as well as a 16-channeled micro-SQUID system15 supplemented the available measurement options for clinical research into test persons or patients, on the one hand, and for basic research (micro-SQUID) on the other hand. In the Biomagnetic Center of Jena, numerous and internationally renowned publications have been brought out, which can be exemplified by the “THE LANCET” article by Uwe Leder et al..26 International acceptance was associated with the venue of the 13th biomagnetic world conference whose organization was granted to Jena. The 13th International Conference on Biomagnetism took place in Jena from August 10 to August 14, 2002 with more than 600 participants.27

figure 11: (left): Biomagnetical Centre (BMC) at the clinical centre of the FSU Jena; (right): double dewar biomagnetometer (2 x 31 channels, symmetrical first order gradiometers, shielding cabin AK3b) by the Philips company
One further improvement for the BMZ was made by the move to the new clinical center named “Klinikum 2000” in Jena (Lobeda), in October 2003, with regard to the space available and the technical equipment. Both the existing systems were complemented by the third system, a vectorial MCG system (ARGOS 200, AtB, Italy) with 195 SQUID sensors28 (figure 12, measuring system on the left, multi-channeled MKG on the right). Mass production of SQUIDs is the basis for modern biomagnetic multi-channeled systems. The Institute of Physical High-Technology Jena e.V. (IPHT), see chapter 6, is able to start up such a mass production on the basis of the aforementioned SQUID developments in Jena. SQUIDs are commercially offered by the Supracon company in Jena.