4. High Temperature Superconductivity
Scientists were trying to find new superconductors with higher transition temperatures in experiments throughout the world, but some theories that refuted the possibility of transition temperatures above 30 K were established in the 1970s. Nevertheless, the more realistic aim of a cheap and less intricate cooling was one of the motives along with the dream of realizing room temperature superconductivity. The YBa2Cu3O7-x (YBCO abbreviated) with a Tc ≈ 90 K was already discovered in 198730 after Bednorz and Müller had given evidence of transition temperatures above 30 K ("High Temperature Superconductor") in cuprates in 1986 for the first time.29 By this, they clearly exceeded boiling temperature of liquid nitrogen (77,4 K) which in comparison with liquid helium (4,2 K) is a cooling liquid that is cheaper and less intricate.

For that reason, the transition to materials of High Temperature Superconductivity (HTS) also began at FSU in 1987/88, however, without neglecting the Low Temperature Superconductors (LTS). In this context, the project of deposition of HTS films by means of sputter deposition (8 VbE) and the project of mono-crystallization (11 VbE) of the new superconductors were started in the PTI of Jena (E. Steinbeiss, W. Gawalek, P. Görnert et al.).

Within a relatively small project (3 VbE) entitled "The Establishment of Basic Fabrication of Thin-Film SQUIDs, Bolometers and Strip-Shaped Conductors on the Basis of HTS Films", the manufacturing of YBCO films by means of laser deposition was launched in parallel at FSU. Michael Siegel and Karin Zach laid the foundations for modern HTS-thin-film technology at that time, even though the Ultra High Vacuum (UHV) system by Leybold procured with all the tricks did not turn out to be useful, since a residual oxygen pressure is necessary for thin films of high quality. Point contact spectroscopy and theoretical modeling (Paul Seidel) were progressed to understand new superconductors and their application making use of the Josephson effects, which the first international publications were already released for in 1989/90.31,32,33

The B-conferrals of doctorates and the advanced doctoral dissertations by Michael Siegel and Paul Seidel that include the first chapters of HTS and, of course, the political change fall within this period of time. The political change also led to the breakup of the department of Detector Physics and to a new formation of work groups in "Low Temperature Physics" (Paul Seidel) and "Small Structures" (Wolfram Krech) within the newly founded Institute of Solid State Physics (IFK) at FSU Jena.

They continued fine traditions, for example, by organizing the symposium of "Superconductivity and Low Temperature Physics" in Georgenthal which, for the first time, became really international in 1990 and resulted in a volume about conference proceedings released by World Scientific Singapore.34

For the first time, the conference of Cryoelectronic Devices was organized by FSU Jena in the new eastern states of Germany and arranged in Reinhardsbrunn in 1991 with the help of the Wilhelm Else Heraeus foundation.

Starting from the two-year project on "The Development and Testing of Josephson Contacts and SQUIDs on the Basis of HTS Films", they launched a series of successful major projects of the German Federal Ministry of Education and Research (BMBF) on superconductivity in January 1991. Furthermore, a series of common or complementary projects and the comprehensive technical investments involved were realized within the framework of the PTI´s restructuring that changed into the IPHT. Some of the employees and projects were transferred into the newly formed division of cryoelectronics (Eckhardt Hoenig) at the IPHT, to which important preconditions necessary for the business location of Jena were given, in general, and to which comprehensive cleanroom technology was given, in particular (see chapter 6).

figure 13: left: two HT-SQUIDs at a YBCO layer on a bicrystal substrate; right: compact MCG system with HT-SQUIDs for use in clinical environment
Further projects were centered on HTS Josephson contacts, HTS-thin-film devices, substrates of semiconductor electronics and hybrid magnetic field sensor arrays in the following years. The tradition in biomagnetic research was followed by a heart monitor system with HT SQUIDs (figure 13 a) which ultimately led to a prototype for clinical tests in myocardial infarct research resulting from the co-operation with medis GmbH Ilmenau and the Biomagnetic Center. Unshielded measurements in the working environment of clinics could be demonstrated by this on a global scale for the first time35,36,37,38 (figure 13).

The successful activities for the application of HT SQUIDs in the field of non-destructive material test are just as worth mentioning as the co-operations with PolyOptik Bad Blankenburg, the Institute for Machines, Drives and Electric Engineering of Measuring Devices (IMG) Nordhausen and the Siemens AG Erlangen are38,39 (figure 14).

Against the background of continuous adherence to competences in superconductivity, cryoelectronics and low temperature physics and whose intense development, the realization of a new helium condenser had also been necessary which superseded the old machine in 1992. Moreover, a consistent transition to small cooling units emerged beside the liquid cooling with helium and nitrogen. Existing approaches and previous works could also be drawn upon at this point. The first project on cooling units entitled "Development of a Cryogenic Head for a Pulse Tube Cooling Unit" started in the summer of 1993 which was significantly marked by Matthias Thürk and his experience with self-made cooling units. In the following years, this kind of low noise cooling technology was also massively expanded internationally, which the Group of Jena has made much noticed contributions to until today.40,41,42,43 The user-friendly cooling units have increasingly been designed and developed together with industry, such as Leybold Köln, Röntec Berlin, the Air-Conditioning and Refrigeration Engineering Institute (ILK) Dresden and Air Liquide Grenoble which are to be named here as representatives (figure 15). 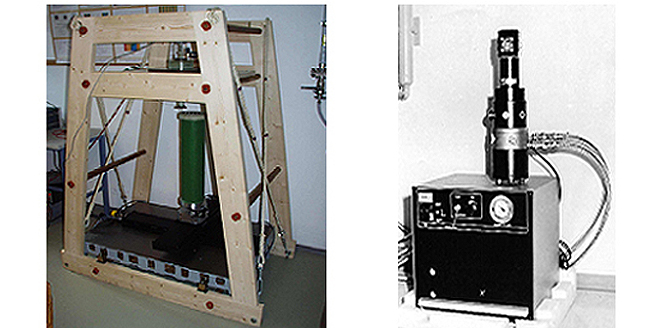 figure 14: measuring station for non-destructive material test with HT-SQUIDs; figure 15: low noise Pulse Tube Cooling Unit, developed in a project together with the Leybold AG Cologne
The useable temperature range was specifically extended to temperatures below the boiling temperature of liquid helium. The "coldest laboratory" of Thuringia was put into operation in 1996 after the He3-He4-mixture of cryostats had been introduced. For the first time, temperatures of 7 mK were realized in Jena. The self-made devices by Thomas Wagner, who continued to be in line with this development, also after his transfer to the IPHT, ensued. As a result, the comprehensive technical potential has also created the conditions for single-electron devices and superconducting qubits.

The structural substance was also reconstructed and expanded after the change in the 1990s. After the "yellow house" in Helmholtzweg 5 had been completely renovated, they moved into it in 1998 again. A magnetically shielded small room, a Faraday room and special extensive cryotechnical installations further improved the working conditions. In the Special Research Field (SFB/TR7) called "Astronomy of gravitation waves", there was the new laboratory for cryogenic mechanical quality measurements of optical components in the former betatron bunker in 2004. This has created the best technical conditions for research work.44 In the meantime, world-class success has been achieved in this field with mechanical quality measurements of the scale 3 × 10+8 (figure 16).

The good position of the groups of Jena within the international research community becomes obvious when considering the many publications, co-operations, conferences and various activities. Jena and its universities, such as FSU, institutes, such as the IPHT, and companies, such as the JenaSQUID GmbH & Co. KG together with the University of Technology, Ilmenau have belonged to the circle of research facilities and companies, which amount to more than 80 by now, since the foundation of the European Network of Excellence for Superconductivity (SCENET) in 1997. Paul Seidel is founder member and, for a short time, board member of the European Society for Applied Superconductivity (ESAS), which was founded in 1999, and was elected to the International Advisory Board of the Applied Superconductivity Conference (ASC) in 2000 for 6 years.

Even the latest EU project entitled "BIODIAGNOSTICS" follows the traditions and successful conceptions of Jena. Together with the Biomagnetic Center (In the meantime, Jens Haueisen works at the University of Technology, Ilmenau.), the possibilities of magnetic nanoparticles for biology and medical science are supposed to be further analyzed in one association of 12 European partners in the future. In this sense, FSU is focusing on measuring equipment with spatial and temporal resolution (magneto-relaxometry, MRX)45 using Low Temperature Superconductivity, LT SQUIDs, and High Temperature Superconductivity, HT SQUIDs (figure 17).