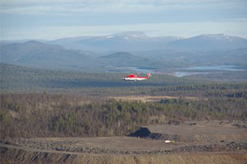 Airborne measuring instrument by Leibniz IPHT and Supracon AG in use at Kiruna in northern Sweden (Source: Maxim Smirnov, LTU)
As part of the nationally funded R&D project DESMEX (Deep electromagnetic sounding for mineral exploration), a new method for highly sensitive and high-resolution exploration of conductive geologic structures in the subsurface was developed jointly with Leibniz-IPHT and other partners.

This method deploys magnetic field sensors in helicopter towed instrument over potential areas and ground-based dipole transmitters in order to investigate electrically conductive geological structures up to depths of > 1,000m using this method.

New SQUID-based magnetometers will be used in the project to increase the dynamic range to more than 32bit, thus eliminating the limitation of conventional 24bit A/D converters. In addition, highly sensitive optically pumped magnetometers are being researched for this application. 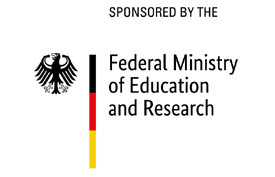 Thus, the DESMEX system should also be suitable for the investigation of relatively weak contrasts in conductivity between surrounding and target structure at the desired depths.
At present the system is based on a helicopter towed platform and had been very successfully tested in Germany and Sweden.

This project had been funded by bmbf in the frame of its r⁴-program under sign 033R130.